As you know, hockey is a fast paced, aggressive game that warrants a specific skill set and physiological attributes.  This inherent physical demand makes these athletes susceptible to certain postural and structural adaptations which may result in subsequent injury.  On one hand, the intensity of the game is a great way for athletes to get exercise, and usually results in a strong, well conditioned athlete.  Conversely, the sustained posture of skating and high force production required for proper technique and propulsion yield several risk factors for injury.  The good news is that these risk factors are modifiable.

First, the position required for skating (including goalies) is very similar to that of any “athletic” position in sports (think ready position in baseball or defensive position in basketball).  However, the problem is that the demands of the game require that hockey players sustain this position for a much longer period of time (45-60 second shifts).  To make matters worse, once the player is done with their shift they rest on the bench in a similar position.  So, for approximately 60-180 minutes (depending on length of game), hockey players are in this flexed hip, forward head, rounded shoulder position.  This is very similar to sitting at a desk, which by the way, is exactly what student athletes do for hours per day.  Several terms have been coined to describe the resultant posture but two popular terms are Upper Crossed Syndrome and Lower Crossed Syndrome [3]. 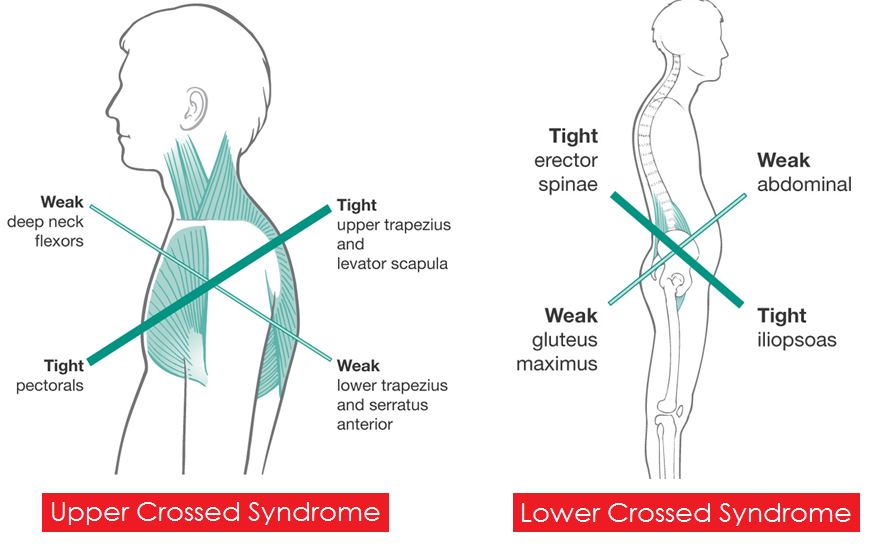 Upper crossed syndrome presents as increased thoracic kyphosis (hunched back), rounded shoulders and a forward head, and lower crossed presents as anterior pelvic tilt and increased lumbar lordosis (arched low-back).  While some support the thought that these postures will result in pain, the research remains controversial [2].  On the other hand, evidence does support that specific muscle imbalances accompany these postures, which may result in pain because of poor movement quality and overuse [3].

While there is a “tug-of-war” taking place between the front and back of the body in hockey players, a similar battle is going on between the inside and outside of the hip and across the pelvic.  Recent research has concluded that hockey players who have adductors (inner thigh muscles) that are less than 80% the strength of their abductors (outside hip muscles) have 17 times the chance of sustaining an adductor strain [6].  This makes sense because of the large lateral and rotational component of the hockey stride.  Furthermore, sports hernias (a.k.a. athletic pubalgia) are prevalent in ice hockey players and can lead to decreased participation and even surgery.  The diagnosis and treatment is complex, but the cause is theorized to once again involve an overuse syndrome and imbalances in soft tissue pull on either side of the pubis [1].  This particular “tug-of-war” that may result in athletic pubalgia is between weak abdominal musculature and fibrotic/ tight adductor muscles. 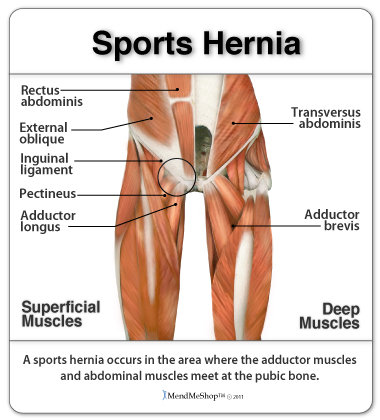 Another structural adaptation in hockey players is the prevalence of Femoroacetabular Impingement (FAI).  FAI is simply the bony overgrowth of the the ball and/ or socket of the hip joint that can lead to hip labral tears and pain. FAI presents as decreased hip flexion and internal rotation range of motion, among others. We have known for several years about the prevalence of FAI in symptomatic and asymptomatic hockey players [5].  However, a recent study shed some light on the fact that FAI is progressive.  The study looked at youth hockey players from 10-18 years of age, and compared their age to prevalence of FAI and labral tears.  The results are eye opening, to say the least.  The table below summarizes the findings [4].

Again, it was not reported if these athletes were symptomatic, but this should not matter.  Remember that FAI is a bony abnormality and presents with decreased range of motion in the hips.  Therefore, it is impossible to “stretch” someone into new ranges if they have FAI because those ranges will not be available.  Furthermore, appropriate exercise accommodations and individualized programming must be made to ensure that the athlete does not approach end range during weight training sessions.

The intention of the above information is not to deter someone from playing ice hockey.  Injuries may occur in all sports.  However, attention should be drawn to the importance of a professional strength and conditioning program, and the fact that all training programs are NOT created equal.  A comprehensive assessment process and subsequent programming allows the coach to modify the above risk factors,  deliver individualized programs, and help hockey players develop the attributes necessary to enhance their on-ice performance.

One response to “Postural and Structural Adaptations in Hockey Players”